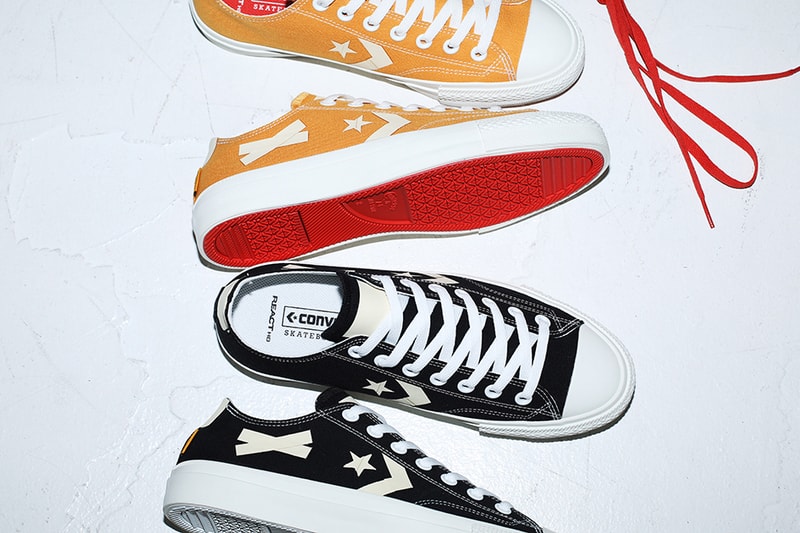 Union and Converse Japan have announced two collaborative takes on the Breakstar Ox, a shoe inspired by Converse classics like the Chuck 70 and Chuck II. Familiar in build, unique in embellishment and modern in technology, the co-created design presents a look that’s equal parts skate and street fashion. Arriving in orange and black, each pair uses a single-colored canvas for the upper, with reinforcement handled by an extra inner layer of elastic that holds the tongue in place. Embellishment is provided by cream-colored overlays that are made to look as if they’re built out of duct tape. These include an off-kilter X directly under the collar plus rectangular swatches on the heel and tongue. Converse’s Chevron logo is even “taped” on the midfoot, and boasts intentionally-kinked detail to lock in its perfectly imperfect style.

A finishing hit of branding is handled by Union’s signature yellow tag on the heel, and midsoles/toe caps are both dressed in an ivory tone. From a technical standpoint, both shoes use a React HD drop-in midsole and a modified traction pattern that’s meant to withstand the rigors of skateboarding — red on the orange pair, white on the black pair.

The Union x Converse Japan Breakstar Ox will release via the Converse Japan webstore on July 17. The MSRP is set at tax-included ¥14,300 JPY (approximately $133 USD). Information regarding a US release has yet to be revealed.