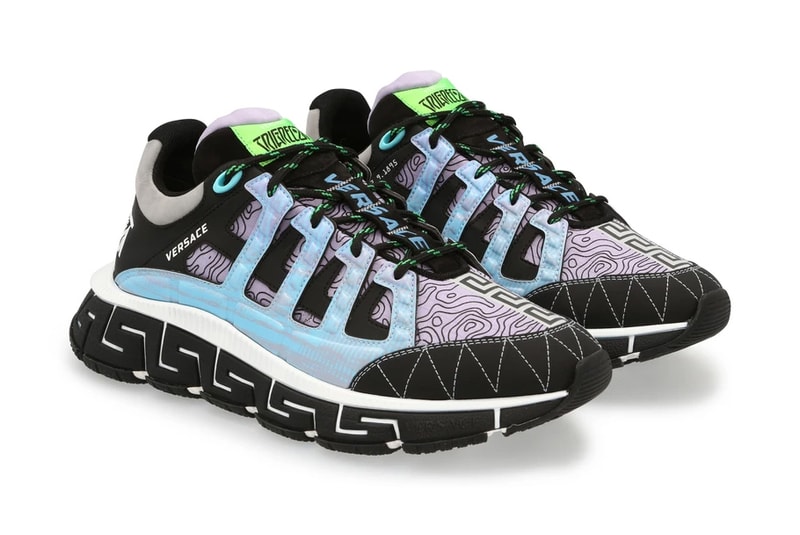 Versace‘s medusa head graphic and Greca pattern are some of the most recognizable motifs in all of fashion, and the latter recently served as the inspiration for the brand’s new Trigreca sneaker. Conceptualized by Salehe Bembury — 2020’s “Footwear Designer of the Year,” who recently announced his departure from the house to pursue new opportunities — the Trigreca offers a new spin on a famous graphic that debuted all the way back in 1988 as part of Versace’s Fall/Winter collection.

Though the design is indeed based around the twisting black and white Greca pattern on its midsole, the uppers are awash in detail and color as well. A gray synthetic base is coated in black topographical map patterns, while the quarters are overlaid with both gray/blue and black pieces. Versace branding appears on a strip running up the throat and under the collar, while Trigreca hits appear in large fashion on the heel and in smaller style on the green fabric tongue tag. Green-flecked laces and a Greca pattern running up the toebox add some extra flair, while cork insoles and a Medusa head ensconced in the outsole round off the look.

The Versace Trigreca sneaker is available now via retailers like 24s, and is priced at $775 USD.

For a more toned-down piece of high fashion footwear, take a look at CdG by COMME des GARÇONS’ velvety black take on the Spalwart Tempo.