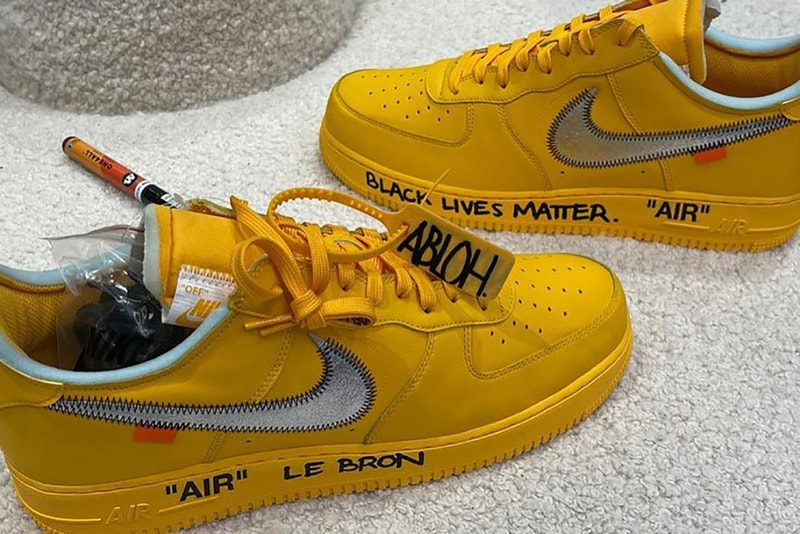 NBA All-Star weekend didn’t have nearly quite as much hoopla surrounding it this year due to the last minute planning, COVID-19 restrictions and limitedness to one day events. However, Virgil Abloh found a way to spice up the day by gifting LeBron James a signed pair of the Off-White x Nike Air Force 1 Low “Yellow” for him to debut in the tunnel just ahead of the festivities.

This particular colorway has somewhat been previewed before in 8-bit form through Abloh’s Public—Domain website that launched in January 2021, but this is the first occasion that we are witnessing the kicks IRL. Design elements aren’t unlike anything we’ve seen from the Chicago-born creative as the foil-y Swooshes, orange tabs, exposed stitching and Helvetica branding are kept intact, leaving the biggest difference to come from the vivid yellow hue that pours over the leather uppers and entire sole units.

To make the in-the-flesh debut of these extra special, Abloh — as he tends to do with his celebrity seeded pairs — marks The King’s kicks with a handful of Sharpie notations. The lateral side of the right pair’s midsole dons a “LEBRON” spell out while the left side states “BLACK LIVES MATTER”. Moreover, the left foot’s medial midsole section states “VIRGIL WAS HERE”, and the right shoe’s tonal hangtag is adorned with an ‘ABLOH’ hit.

An official release date to the public has not been revealed yet, but you can likely expect an announcement from Nike in the coming months.