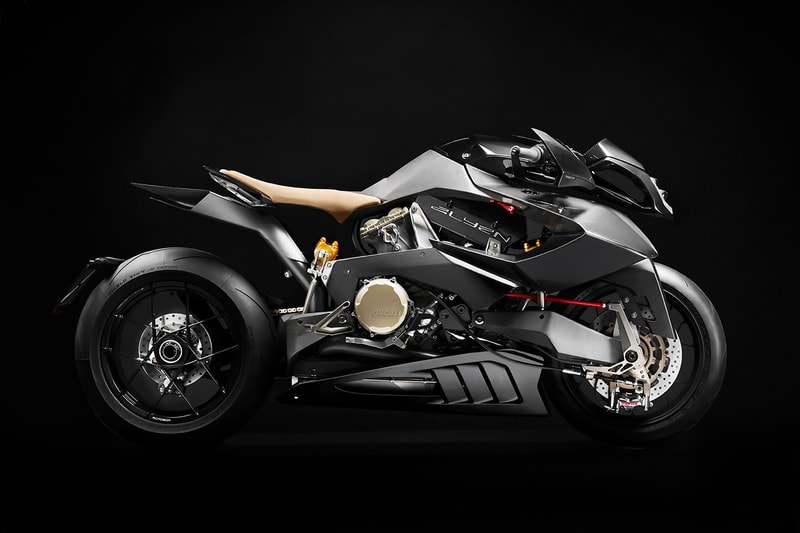 Italian small-unit manufacturer Vyrus has debuted its all-new Alyen 988 superbike, combining speed and power with a futuristic design for a motorbike like no other.

The Alyen 988 is powered by a Ducati-sourced four-stroke engine producing 202 HP from a 1,285 cc displacement. This is paired to a six-speed gearbox, allowing the superbike to rev to 10,500 RPM and onto an undisclosed, but likely high, top speed.

Vyrus’ talking point for the Alyen 988 is the motorbikes bodywork. It’s an intricate, geometric design made from a network of naked carbon fiber panels that sit atop a bespoke magnesium double omega frame. Sharp angles at the rear stop short of the overhanging rear wheel unit, while under-seat exhaust pipes give the bike a sporting look from the back.

The design means that the engine unit is slightly exposed, displaying components such as the Ducati cover on the lateral side and elements of the independent front-and-rear push-rod twin-pivot suspensions. Vyrus completes the Alyen 988’s look with a set of 17-inch carbon fiber wheels and a digital speedometer nestled in front of the handlebars. Take a look at the Vyrus Alyen 988 in the gallery above, and for more information, check out Vyrus’ website.

In other news, BMW has put its most powerful engine ever into its new Motorrad R18 Cruiser.