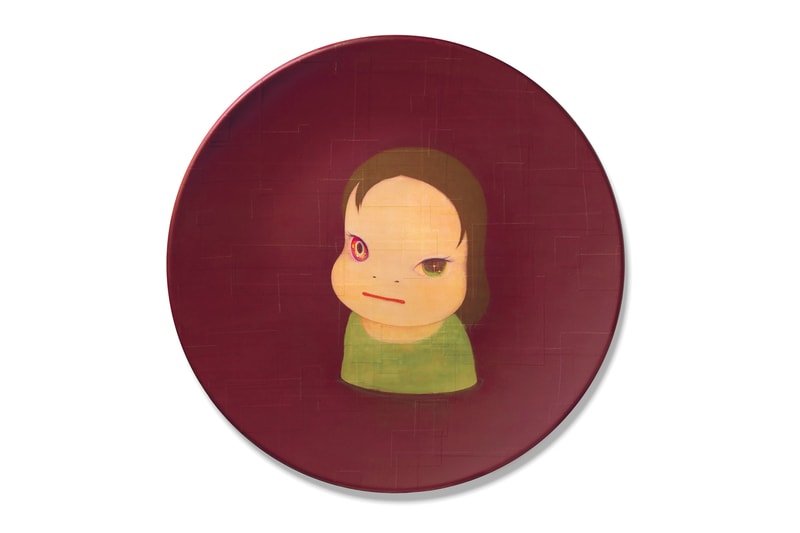 Last year, acclaimed Japanese artist Yoshitomo Nara’s Knife Behind Back (2000) fetched $25 million USD at Sotheby’s Hong Kong — making the painting the artist’s most expensive work ever sold at auction. Nara’s Dead of Night (2004) is now heading to Christie’s Post-War and Contemporary Art Evening Sale in London next week. The 180 x 180 x 26.5cm work is expected to fetch up to $4 million USD at auction.

Dead of Night features Nara’s signature angry-eyed female subject in the center of a circular panel. Her starry eyes are two different colors — one matches the green shirt she is wearing, the other with the work’s burgundy background. Composed from patchwork squares of canvas on fiber reinforced plastic, the work belongs to a series of iconic “concave discs” Nara began in 2001 after returning to Japan from twelve years in Germany.

Christie’s Post-War and Contemporary Art Evening Sale will take place on February 12. To browse more work from the sale, head over to Christie’s website.

In other art-related news, Benedict Radcliffe announced a new sculptural edition inspired by the Porsche 934.

collaboration with my used brushes. and idea sketches for bloodthirsty butchers tribute T in 2018.

picked up some abandoned drawings from last year and new drawings (3rd image) from this month. They are not for sale yet. I’m creating those, actually not for sale, but to find myself.